“Who am I?” is a method of spiritual guidance (akin to finding polynomial roots?) whereby one successively cuts down answers until the answer remains.

It was popularized by Ramana Maharshi (to the best of my off-the-cuff knowledge).
However, as I have not read Ramana’s works or listened to his talks directly, perhaps he does not use the meditation technique in the rhetorical manner I write of here.
:)

The same technique was used by Nisargadatta Maharaj in I AM THAT.

Bob> Who are you?
Zar> I am Zar.
Bob> “Zar”? Are you [‘Z’, ‘a’, ‘r’], the sequence of letters?
Zar> No, that’s just my name. I am this person standing here.
Bob> Oh, so were you this same person at 3 years old? Will you be as much Zar if you lose an arm?
Zar> Well, yes, I kind of will. I am my own unique complex of thoughts and feelings.
Bob> Try this meditation technique. Don’t you see that you still exist even without thoughts or feelings?
Zar> Hmm, you’re right. What is my Élan vital? My eternal, constant, homunculus-like essence?
Bob> You see, it’s awareness. Pure awareness.

The conclusion then is that I am simply consciousness or awareness – not my thoughts, not my experiences, not any particular state of being.

To exemplify the sleight of hand here, take Mx Buttocks below (courtesy of WolframAlpha): 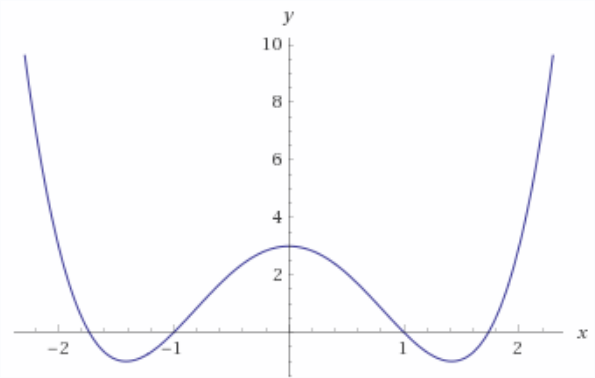 The answer Bob arrives at is even correct, as in the human case (to the best of my knowledge).

Why call it a sleight of hand then?

Well, because the flow of the dialog creates the impression that all other answers have been ruled out as “lacking”, leaving the one core, true answer.
When the question is actually fairly ill-posed.
Bob and Buttocks proceed as if Buttocks is either a fixed value or nothing more than “of \(\mathbb{R}^2\) (the (x,y) plane)”.

Bob’s rhetoric, this “Who Am I?” game, is in a sort of Straw Man style arguing against a fixed essence model of self.

Actually, rather than shifting how we view “self” in light of the “fixed essence of self” model falling apart, Bob keeps using the “I am that which is constant throughout all of my existence, all of me being me” ‘definition’ of self.

Given most of “Zar” (and Buttocks) changes over time (over x from \(- \infty \)), most of Zar other than the core Awareness or Beingness is thus “not Zar”.

Thus we can clearly say what Buttocks is, even as his value goes up and down, wheee.

Has Bob ruled this out for you, for humans yet?
Not really. The space becomes 4-dimensional (or 11-dimensional if you go with M-theory).
Moreover, rather than one point at each time, you are a complex configuration of about ~ \(7 * 10^{27}\) atoms (which are still not ‘points’).

What Bob has ascertained or argued is that Awareness or Consciousness is a constant of my existence.
(Sri Nisargadatta Maharaj has claimed that we can learn to be aware through sleep as well, so that little caveat melts away.)

Whoever I am, I am conscious.

“Who” am I is actually a misleading question from the outset (often with the aim at bamboozling you into identifying with “the observer” or “the witness”).

To pry pedantically into this question as if “Awareness” is some entity observing everything going on inside and out (that is not “me”) reeks of the Homunculus Theory of Self: 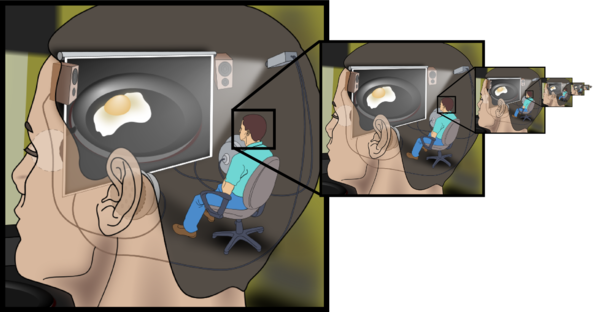 This idea that there is some “true me” inside watching everything.

This property-less true witness (Atman?) is almost a refined Homunculus in the “God of the gaps” style where the essence of “self”ness remains despite any actual properties of the inner-“I” being culled.

One can, as some Buddhists do, take the next step an conclude “I am no one” (as I can find no unchanging identity) rather than to “identify as Consciousness” (which isn’t much of a self anyway).

Or one can switch over to “what am I?” and start the investigations.
Does answering to full satisfaction require a Theory of Everything?

If we know that Buttocks is a polynomial, then Lagrange interpolation will provide the exact answer given 5 unique points (samples).
If we know the degree of Buttocks, then we can even know how much data we need to collect to know “what Buttocks truly is”.
(– Ok, if Buttocks can freely move around its curve, perhaps we need the function determining this movement too! Egads! Now it’s complicated like us?)

What if we extend polynomials to analytic functions or power series?

Of course, we don’t really have to get infinite for problems.
Provided N may be very, very large relative to the amount of data/experience we can gather, we are liable to run into similar difficulties.

What does this mean?

One response is to loosen up about what exactly “self” or “I” am.
These folk using this fallacious rhetoric are still Absolutists with sticks up their asses.
Perhaps embrace Fuzzy Truth Values and ask to what degree various self-models seem to wark?

What if I am a different person at different points in my life?
There are prominant some Strange Loops and Attractors from 13 to 19 and then somewhat different ones from 22 to 25, 25 to 28 and from 28-29.
They more-or-less dwarf the commonalities spanning the epochs of Zarathustra: I am better modeled as a progression of 6 related “selves”.

It’s worth recalling that, as Alan Watts points out in Out of Your Mind, such sleights of hand as this “Who am I?” game can be may not be done literally.
The “Guru as Trickster” idea indicates the focus may be more on busting faulty fixed or cultural concepts of identity than on “actually finding true identity”.
– In which case I am merely complaining about people who missed the memo.
Except, well, if you choose a cryptic style of communication where no one can quite be sure what your point is… shrug

When speaking on Absolute terms, I’m reminded how profound \(1 + 1 = 2\) can seem to me.
Clearly two apples are not identical, and it’s hard to specify the exact boundary of the apple on the scale of quarks.
So is the truth value of \(1 + 1 = 2\) always less than \(1\) (absolute truth) in reality?
Except while it’s hard to specify exactly, the apples are clearly discernible objects on our macro scale.

But then “Zarathustra” is fairly discernible from likely all other humans on Earth (to someone who knows him adequately).
So what bearing do these musings on uncertainty and the absolute have on “daily life”?
Beyond saying “don’t be so rigid about identity”..

Aside on Open Individuality

This Homunculus of Awareness idea has also been called Open Individualism as seen in this image: 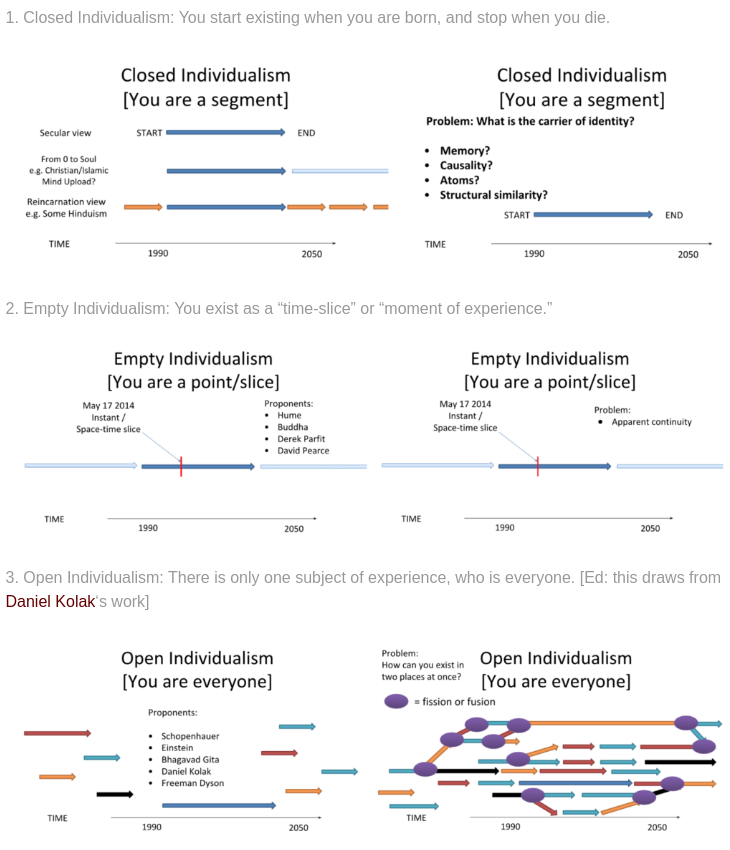 (Gee, I love me some anologies.)

Our microbiome is full of bacteria, small individual life forms.
And looking larger than humans, we see that individual humans can make up part of nascent Global Brains.

Anyway, so far as I can tell, it’s wrong to say that “there is only one subject of experience, who is everyone”.
At this point the “who” has been lost, leaving just awareness.
The plot has been lost.

Ah, then we come to fun questions such as “what is subjectless experience?”.
Does all experience or awareness or consciousness involve an “experiencer”, an “observer”, a “subject”?
Or is that “experience of being a blank, thoughtless, feelingless monad of subjective awareness” still a very particular form of experience?

Adopting a Panexperientialist or Panpsychist lens where “there is something it’s like to be anything”.
There is some quality of experience to electrons, rocks, etc.
Is this “experience” worth being called “conscious experience” or “subjective experience”? Perhaps not.

In summary: Help I’m a Rock.

(Disclaimer: I am not a super genius or expert in physicsor computer theory. Feel free...

In “personal development” communities and other advice I’ve seen a trend of telling people they...